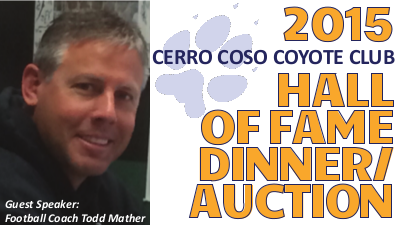 The Coyote Club at Cerro Coso is proud to announce their Annual Hall of Fame Dinner and Auction. The focus of the night is recognizing athletic achievement in the Indian Wells Valley, while enshrining former Coyotes in the Cerro Coso College Athletic Hall of Fame.

Members of the community are invited to attend a celebratory dinner and auction where individuals and teams from the local area will be recognized for their extraordinary accomplishments. “Our goal is to recognize them for their achievements, engage them with the greater campus community and acknowledge the contribution they have made,” Interim Cerro Coso Athletic Director Justus Scott said.

This year’s event will be held on Saturday, March 28, 2015 in the Gymnasium at the Raymond A McCue Athletic Complex, 3000 College Heights Boulevard, in Ridgecrest. The doors open at 6:30pm and dinner catered by Casey’s will start at 6:45pm., followed by awards, raffles, and an auction.

We congratulate these individuals and teams, and invite the community to join us as we recognize their achievements on March 28 at the Cerro Coso Coyote Club’s Annual Hall of Fame Dinner. Tickets are $20 for Adults and $10 for Children (12 & Under) available at Red Rod Books and the Cerro Coso Business Office. Table & Event Sponsorship are still available.