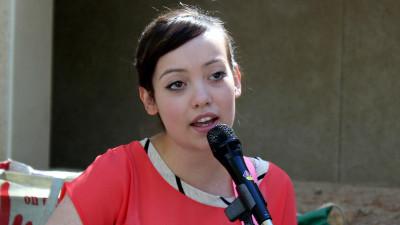 Those looking for an afternoon of musical enjoyment will be treated to a FREE concert in the Luis Miro Sculpture Garden at Cerro Coso on Saturday, March 14, 2015 from 2 to 4 p.m. Featuring live entertainment by three very talented local musicians, Alas Tarin, Alex Tellez, and Richard MacNeill, the atmosphere promises to be relaxing and enjoyable.

A student at Cerro Coso, Alas Tarin is a singer and songwriter. She picked up a guitar at 18 and began writing songs as soon as she could play chords. Not long after that, she formed a band with a few college friends and played several local venues. Attending open-mic nights at the USO, Alas established herself locally as a solo-musician. She has played multiple shows at the college and opened for other artists including local bands Unconditional Life and bluesman Roy “Book” Binder.

An English major at the college, Alex Tellez will sing and play his acoustic guitar. A very talented musician, Alex began by playing the violin in the third grade, moving up to piano in middle school, and guitar in high school. Influenced by indie rock from the 90’s, hip hop, and soft guitar sounds of Bon Iver, Alex has performed at open-mic night at the USO building and has competed in musical talent shows and in the production of Joseph and the Amazing Technicolor Dreamcoat last year.

Like many musicians, published author and musician Richard MacNeill will share his upbeat and soulful musical talents accompanied by his guitar and ukulele. Influenced by the works of other writers who utilized music as a form of artistic expression like Janis Joplin and Bob Marley, Richard recently encouraged his friends with the following quote…“We're only here for a short while and each moment lasts for only a breath, and you have only this much time to make it the best life possible. So, live and love without fear of regret or rejection. Live without fear and enjoy every moment as your very first step towards Life and your very Last words.”

The College Sculpture Garden is a great place to relax on a Saturday afternoon and enjoy the melodious talents of local artists in a beautiful surrounding. The concert is FREE and open to the public. Cerro Coso clubs will be on hand providing food and drinks for sale.

Bring a lawn chair to sit on and celebrate spring, nature, and culture at Cerro Coso Community College.