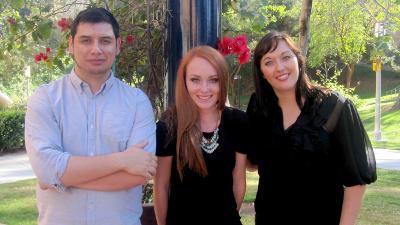 On Saturday, March 28, 2015, Cerro Coso Community College was strongly represented at the Annual HTCC Student Research Conference held at the University of California, Irvine. This multidisciplinary conference, sponsored by UCI and the Honors Transfer Council of California, showcases outstanding faculty-mentored research by students from California community colleges, with a focus on honors students.

Three Cerro Coso students presented their research at this year’s conference. Honors Program student Hannah Small’s presentation on the non-biological roots of “races” and their elimination in forensic anthropology suggests the use of ancestry in identifications as opposed to race would allow forensic anthropologist to more accurately and scientifically identify human remains. Hannah was mentored on the project by Anthropology Professor Dr. Sarah King.

Mentored by English Professor Cliff Davis, Beverlee Wood’s literary presentation entitled “[Less] than Kin and [More] than Kind: Hamlet and Iago”, proposes the protagonist of Hamlet has essentially the same intellect and is in effect the same character as Iago, the antagonist of Othello. Beverlee states the similarities between the two include the manipulation techniques that Hamlet and Iago both use, their clever creation of alter egos, their scurrilous treatment of women, and even their personal self-doubts and insecurities and finds the only discrepancy in the two being a difference of circumstances rather than of morality. Beverlee is also an Honors Program student and will be graduating from the college this May.

Nicolas Elder’s literary presentation explained and analyzed the sources and inspiration of the multiple cosmological elements in John Milton’s Christian epic poem, Paradise Lost. Also mentored by English Professor Cliff Davis, the ultimate goal of Nicolas’ research was to facilitate understanding of the complex cosmology constructed by Milton, particularly in regard to the shape, size, distance, orientation, and function of many of the elements in Milton’s cosmos.

Presenting their work at the HTCC Student Research Conference makes these Cerro Coso students eligible not only for monetary awards but also to submit their work for publication in the HTCC anthology Building Bridges, published through the University of California, Irvine.