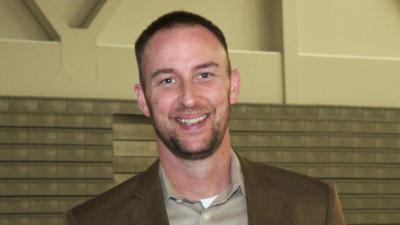 Cerro Coso officially has a new leader of its athletic programs. Kris Dickson will now be in charge of the Cerro Coso Coyotes.

College President Jill Board said Dickson is definitely the person for the job. “He is a leader and a strategic thinker who understands how to build a successful program.”

Dickson first joined the Cerro Coso staff in 2013 as head coach of the new Lady Coyote’s Soccer Team before being deployed to Bahrain last year. A Marine for 5 years and a helicopter pilot in the Navy for over 16 years, Dickson will officially retire from the military on 1 May.

Great things are in store for athletics at the college this year and Dickson’s extensive experience as a player, coach, and leader make him a perfect fit for the position. He holds a BS Degree in Kinesiology (Physical Education/Athletic Training) from Sonoma State University, FIFA AFC (Asian Football Confederation) “C” License, and an NSCAA Director of Coaching Certification, as well as three Master’s Degrees: Sports and Health Sciences and Military History from the American Military University, and National Security and Strategic Studies from the Naval War College. He is also a member of the Cal South Coaches Association and National Soccer Coaches Association of America (NSCAA).

Dickson and his wife, Cami, love Ridgecrest and are rooted in the community with their two boys: Cole (15) and Casey (13).

Cerro Coso thanks Kris for his service to our country and welcomes him back as the new Athletic Director!