Christensen Inducted into Hall of Fame 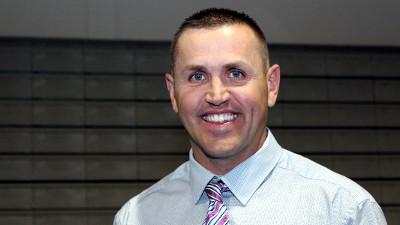 Former Coyote baseball player Sam Christensen (‘00’) was inducted into the Alumni Hall of Fame during the Coyote Club’s 3rd Annual Hall of Fame Dinner held on Saturday, May 7, 2016, in the Gymnasium.

The focus of the evening was recognizing athletic achievement in the college service area while enshrining former Coyotes into the College Athletic Hall of Fame. Former Head Baseball Coach Dick Adams returned to present the honor to Christiansen.

One of the most celebrated athletes in school history, Sam Christensen was a major contributor to both of the only two Cerro Coso teams to win a conference Championship. He still holds the career record for hits (170), Batting Average (.475), doubles (40), and RBIs (178), and is listed in the Top 5 for runs scored and home runs. He was named the 1999 Rookie of the Year and went on to earn the 1999 and 2000 Big Stick Award. A natural leader both on and off the field, Christensen was named to the 1999 and 2000 1st team all-Southern California Baseball team as well as 1st team all-Foothill conference. He was a 2000 1st team California Junior College Athletic Association All America pick. Other honors at Cerro Coso include Foothill Conference Player of the Year, Cerro Coso Player of the Year, and Team Captain. Christensen is perhaps remembered at Coso for his 0-2 count hit for a walk off grand slam that won the 2000 conference championship outright. Christensen went on to play at Colorado State University Pueblo where he was inducted into their Hall of Fame in 2013. Following suit, he is the only two-time Rocky Mountain Athletic Conference Player of the year in conference history. He hit .452 during his junior season in 2001, leading the nation in doubles and earning All-American honors as the team went 45-14. He followed it up with a .471 season in 2002, leading the nation in hits. During his time with the ThunderWolves, his teams won 88 games, the most over any two-year span in school history. Following his collegiate career, he was drafted by the Pittsburgh Pirates and was named to the RMAC All-Century Team in 2008.

Christensen currently resides in Meridian, Idaho, with his wife Rachelle, two children, Braden and Gracie, and 2 dogs, Daisy and Rocky. He is a beloved teacher at Mountain View High School. In his spare time, he coaches his children’s sports teams and continues his athletic passion as a professional softball player with Sonny’s/Easton Softball Club.