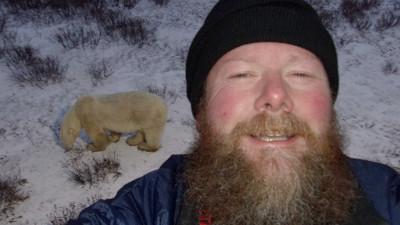 Dr. Seuss’ quote “Why fit in when you were born to stand out,” is exactly what comes to mind when hearing of Kane’s many adventures in life. Whether guiding students down the headwaters of the mighty Amazon, hiking the Appalachian Trail, photographing polar bears in Canada, or swimming with whale sharks in Georgia, one thing is for sure…Kane’s “spirit of adventure” is his continual willingness to meet and be moved by the unexpected, larger forces, and possibilities of life.

He grew up in Upstate New York and attended Columbia Greene Community College in Hudson. Kane says he is a “student of life for life” and enjoys educational challenges. A river biologist by profession, Kane has served in many capacities in the education system over the years, starting as a high school biology teacher. He spent 3 years working for a consulting firm managing projects in the developing world funded by the United States Agency for International Development and assisted in developing a black lipped pearl oyster farm in the Cook Islands, a tuna fish project in Tonga, and a red snapper project in Tuvalu. He managed the Math, Engineering, Science, and Achievement (MESA) Program at Hartnell College in Salinas, California, for 3 years, served as the Dean of Science and Engineering at American River College, and spent 8.5 years as the Associate Dean of Science and Math at Sierra College in Rocklin.

Danger doesn’t lie in employing routine, but in mistaking it for living. In search of happiness, Kane lives in a way that balances strategic structure with meaningful quests. He took eight months off of work and spent that time walking across Scotland and the hills of Southern Utah, and took a month walking in the Himalayas. It took a year and a half to plan but the execution of that plan created some of the happiest times of his life and led to the creation of his blog, the Ministry of Happiness.

When asked what made Cerro Coso appealing to him he said, “the change in scenery and challenge of creating new workforce programs in an area with little or no population growth was intriguing. I love the high desert, surrounded by the mountains and desert terrain. It just felt right.” Kane took 18 months off work before coming to Cerro Coso and hiked over 1,000 miles of the Appalachian Trail and is currently writing a book about the experience called “Appalachian Trail Happiness” to be published soon.

It should have come as no surprise when Kane claimed that he had attended Burning Man 7 times and hoped to go again next year. An annual gathering of more than 70,000 people, Burning Man is a temporary community erected in the Black Rock Desert in Nevada known as an experiment in community and art.

Kane holds an Associate of Science Degree in Life Science from Columbia Greene Community College, dual Bachelor’s Degrees in Biology and Secondary Education from State University of New York, a Master’s Degree in Applied Ecology from Eastern Kentucky University, and has worked on a Ph.D. (ABD) from the University of Tennessee. He also attended the University of the Pacific, McGeorge School of Law in Sacramento, California.

We wish you much happiness at Cerro Coso, Michael!