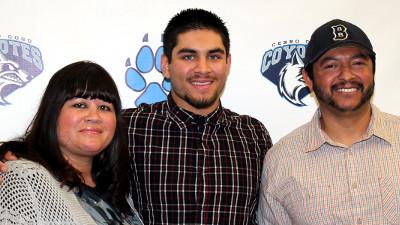 January 11th was a great day for Coyote’s outfielder Dominique “Biggie” Hernandez. Surrounded by his parents, family, coaches, teammates, and staff, he signed a letter of intent with Missouri Baptist University in St. Louis to play baseball on a scholarship.

A native of Ridgecrest, Hernandez played city baseball and gives his father a lot of credit for pushing him to better his game. “I pushed him hard,” confessed his father Sergio. “He is such a nice, hard-working kid. Very polite, humble, and loves the game unconditionally.”

Coach Scott agreed, “I could see there was something truly different about Biggie. He really is a nice guy, and I have high expectations for him, and for all them this upcoming season,” he said pointing at his team. “The type of teammate he is, the work ethic, he leads by example. As a whole, I couldn’t ask for a better kid to help me out,” said Scott.

Biggie has set the bar high for himself with a goal of someday playing right field for the Anaheim Angels. He has a plan, for now he will concentrate on his studies at Cerro Coso and give his team his all this season, before he packs up and heads off to Missouri in the fall where he will play for the Spartans and major in Business.

The Coyotes are looking strong this season and Coach Scott believes there are more signings in the near future for six to seven sophomores. Congratulations and best wishes to Hernandez for a safe and successful college life on the field and in the classroom.