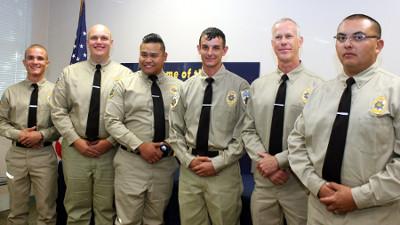 Director Jarrod Bowen congratulated the recruits and thanked them for their “willingness to serve and their endurance to train.” He went on to tell those present that this program is not in any way easy. “These recruits work full-time jobs, many have families to support, and then they come up to the college and train really hard for the grueling and at times exciting aspects of law enforcement, and they could not do this without the support of their families.” At this point in the ceremony the recruits presented their loved ones with flowers to show their appreciation.

Recruits Jayson Arnold and Joseph Schatz received top honors for their achievements in the Level II and Level III Academy. Arnold received the Top Academic Award presented to the recruit who earns the highest academic average. Schatz received the Top Shot-Best on Range Award given in recognition of his outstanding marksmanship and the class’ highest ranking in firearms training for marksmanship, safety, and tactical proficiency in both levels. Retired Bishop Police Officer Christopher Carter was once again voted “Top Instructor” by the recruits.

“It is absolutely crucial that our communities attract and retain men and women of the highest moral fabric and integrity, not to mention courage and determination,” said Recruit Training Officer Christopher Carter. “That is exactly what we have in this class tonight. Men who are willing to place their lives on the line in the interest of protecting others. I would proudly serve with any of them.”