Lash Inducted into Hall of Fame 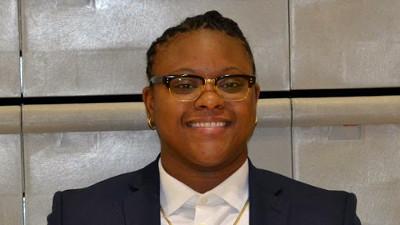 Originally from Detroit, MI, Lash chose Cerro Coso over two Division I colleges to develop her basketball skills and confidence. Accepted at both Western Michigan University and Eastern Michigan University, Lash seized the opportunity to grow and seek new experiences at Cerro Coso. Her collegiate journey began at the age of 17. Determined to work harder in practice, Lash challenged herself to be a leader on the court and in the classroom and earned the role of team “captain” both her freshman and sophomore years.

With the title came a desire to lead by example. As team captain she was determined to exude respect and get it in return, while focusing her team on winning. Lash’s goal for the team was to end the season better than the previous team’s season. They were culturally diverse, talented in different positions, but they all wanted to finish top in the conference. Challenges and injuries strengthened their resolve to make their goal. The team learned a lot from one another, pushed, and worked hard.

While at Cerro Coso, Lash earned All-Conference both years, was named MVP player at every tournament except one, was invited to display her talent at the California Junior College All-Star game her sophomore year, and was ranked 12th in the state in scoring. One of her most memorable recognitions was receiving the Fire Mountain Foundation (now Cerro Coso Community College Foundation) Outstanding Student Athlete Award. She was the first female athlete to receive the award for academic and athletic achievements in more than 5 years, and was inducted into the first chapter of the Phi Theta Kappa National Honor Society for two-year colleges at the college.

Though her main reason for choosing a community college was to develop and learn more about basketball, she learned far more by participating in Cerro Coso programs. She was mentored and encouraged to strive for success in all tasks. Being a student athlete takes a significant amount of discipline and strength and is at times overwhelming. “I credit my ability to overcome adversity, to take calculated risks, and to not fear ownership as a leader, to my positive experiences and adventures at Cerro Coso,” said Lash.

After graduating from Cerro Coso, Lash transferred to the University of Las Vegas where she earned a Bachelor’s Degree in Fine Arts and is currently attending their graduate program studying Clinical Mental Health Counseling. Her career goal is to be an Athletic Counselor/ Advisor. “One day I hope to touch the lives of athletes like the individuals at Cerro Coso influenced mine.”