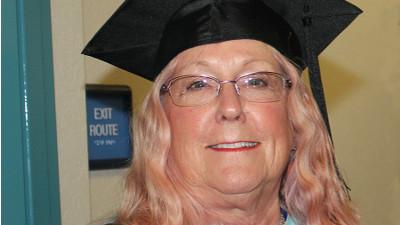 Faculty Marshal for the forty-fifth Commencement Ceremony in 2018 was retiring Psychology and Human Services Professor Debra Rundell’s final act of service to the College. She has served Cerro Coso with distinction since 2002.

Rundell began as an Adjunct Instructor at the Lake Isabella Campus in the spring of 2002, and became full-time in the fall of 2007. She was granted tenure by the Kern Community College District in 2011.

Rundell’s excitement and enthusiasm for teaching is known to bubble over into her classrooms, leading students through exercises that support behaviors that benefits others, and inspire kindness through a “random acts of kindness” project, like the most recent KRV stuffed animal drive to help first responders comfort kids in emergencies. She consistently embraced new and exciting technologies in her classrooms, teaching classes in Bishop and Mammoth Lakes from the Lake Isabella or Ridgecrest campuses via interactive television, also known as iTV. This form of distance education provides opportunities for students located at other campuses to participate in classes that might not otherwise be available.

Named three times as the “Outstanding Full-Time Faculty of the Year” by the students at the Lake Isabella Campus, and the recipient of the 2016 Access Programs Outstanding Faculty of the Year Award at the Ridgecrest Campus, Professor Rundell served as the advisor for the Human Services Club, and served on many Mental Health Panels to help others embrace a disenfranchised population with compassion and understanding.

In retirement, Professor Rundell and her husband plan to travel the United States in their new fifth wheel and rebuild their home lost in the Erskine Fire. She holds a Bachelors of Art’s and Master’s in Psychology & Human Services from California State University, Northridge. We wish Professor Debra Rundell all the best in her retirement!