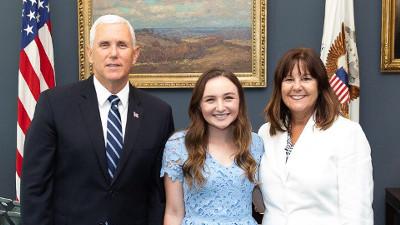 Many people dream of working in the White House someday, while others must be content with merely visiting. The center of executive power in the United States, the White House has a rich and interesting history. For Cerro Coso Community College alumna Kelsey Hire, the dream became reality this summer as she spent 10 weeks interning for Second Lady Karen Pence. This was Hire's second internship in Washington DC, having served as an intern for Congressman Kevin McCarthy last summer.

According to Hire the White House receives thousands of applications every year for summer internships, and she was extremely humbled that she had been chosen to serve. “It's a surreal blessing, and only a few get to serve in something of this magnitude and be a part of something so great,” Hire said of her work with Mrs. Pence and her cause to bring attention to art therapy and to the sacrifices made by military service members and their families.

Extraordinary opportunities and memories were forged throughout Hire's time as an intern. But what resonates most with her is the importance of always giving back. The Second Lady and her family's commitment to military readiness by actively supporting military spouses and veterans was inspiring to Hire who, says “it was the experience of a lifetime serving as an intern in the office of communications and planning for Mrs. Pence. Every day was an incredible learning experience and I walked away from each day amazed and humbled at the opportunities I had been given.”

Public service has always had a special place in Hire's heart, but the White House Internship Program took her passion to a new level. Serving the needs of our military veterans is a subject near and dear to Hire's heart. Her grandfather was a Navy veteran and anything she can do to support veterans organizations makes her feel closer to him. While at Cerro Coso she played an important role in starting the Veterans Club on campus, and while attending UCLA she has already signed up to volunteer at the Veteran's Home of California in Los Angeles.

Understanding the value of public service, this once in a lifetime experience immersed Hire in both the big picture strategy and the important details that encompass the diverse activities and causes of the Second Lady.

A political science major at Cerro Coso, Hire reflected on her success, noting her studies and activities at the college provided her many invaluable educational experiences to serve in leadership roles and enhance the college experiences of her fellow classmates. While at Cerro Coso, Hire served as the Vice President of Student Government (SGCC) and was an active member of the SGCC for 2 years. She started off as a senator, moved up to be the Region IX Representative, and was elected Vice President and President of the Senate for the 2017-2018 school year. A student in the college's Honors Program, Hire received the Honors Transfer Council of California Exemplary Achievement Scholarship, received the Department Award for Social Sciences, made the President's List numerous times, and was a member of the Beta Kappa Chi Chapter of Phi Theta Kappa Honor Society. Hire credits these experiences as having helped her develop useful professional skills and broadened her knowledge and understanding of the nation's government and political science that were useful to her in both of her internships.

Hire graduated from Cerro Coso in May and will begin her next educational journey at the University of California, Los Angeles (UCLA) in just a few short weeks.