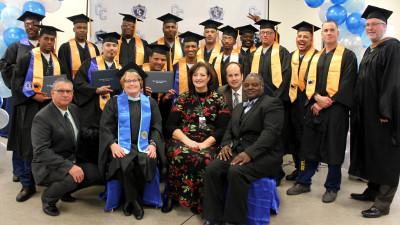 Twenty-five inmates from the California City Correctional Facility have become the first graduates of a prison based education program that awarded them associate degrees from Cerro Coso Community College in 2018.

On Tuesday, December 4th, 17 men at the facility received their degrees, joining 8 men who graduated in a ceremony in May. Students enrolled in the program are taught the same courses by the same Cerro Coso professors who teach in the classrooms on campus and online. All earned associate degrees.

In addition to the 25 graduates 63 qualified for the Phi Theta Kappa (PTK) International Honor Society. To be invited to join PTK a student must have completed a minimum of 12 units and hold a GPA of 3.5 or higher. The mission of the PTK organization is to recognize and encourage the academic achievement of two-year college students and to provide opportunities for individual growth and development through participation in honors, leadership, service, and fellowship programming.

Offering hope for a better future, the Prison Education Program is designed to help students transition back into society upon release, effectively reducing recidivism. Cerro Coso is now offering college classes in two California prisons, one in California City and one in Tehachapi.

More than 2.2 million people are incarcerated in American federal, state prisons, and county jails, according to the U.S. Bureau of Justice Statistics. Each year, hundreds of thousands of formerly incarcerated individuals are released back into society.

President Jill Board explained in her address to the graduates, “According to a 2013 Rand Corporation study, the rate of recidivism for inmates with no education is 86%.  For those inmates who participate in a college program it is 43%, and the number drops to 16% for those earning an associate’s degrees, 6% for those earning a Bachelor’s Degree, and 0% for those with a Master’s Degree. You may have a hard time envisioning yourself making the step to go on to a university or attending a community college campus in the area you live. Take note that many universities and community colleges have or want to have programs designed specifically to support you as a community of learners. I share this so you know it is on our radar state-wide that our community colleges can be an option for you to continue your quest for change as you either transition to the university or into the workforce.”

In April, the College was the co-recipient of the California Community College Chancellor’s Office Innovation Award for their creative programing of guided pathways, data collection, and student centered approach in the prisons.

Cerro Coso’s Prison Education program provides an opportunity for success after incarceration, and improves the safety of prisons and communities.